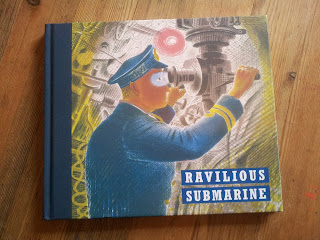 Finally recieved my copy of this book. I have seen original copies of this series of lithographs at various art fairs for years, and have coveted them because they are so beautifully drawn and coloured but they are well out of my price range. I now have the next best thing in the form of this well designed, affordable book. Followers of this blog will know that I have been a fan of the work of Bawden and Ravilious for the longest time, and this book charts Ravilious' second venture into the art of lithography, (his first being the book High Street, which was reprinted last year). 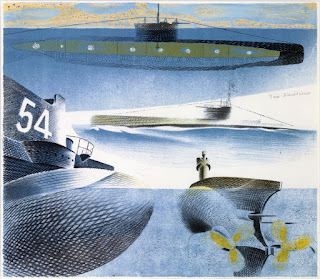 The Submarine Dream lithographs were made in the winter of 1940-1 whilst Ravilious was a war artist, and are ten images of submariners at work and rest aboard the submersibles. Rather than handing over the images to a master printer to produce, Ravilious made them himself, and the individual prints vary widely across the edition to show how he subtly altered each of the images. As a result of this altering whilst printing the lithographs, each print has the status of an original piece of art rather than a reproduction. 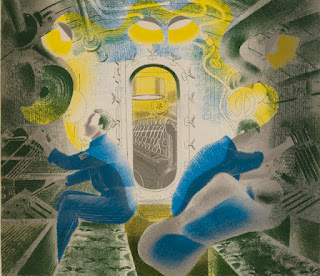 There was a an interest in auto-lithography among British artists in the mid 20th century, and it is a process that faithfully reproduces, and in some cases enhances the the line and texture of the original artwork. The auto-lithography process was used widely to good effect in children's illustrated books, the School Print and Shell advertising poster series,  as well as London Underground posters of the period. Other fine exponents of the process whose work I particularly admire are the artists/illustrators Barnett Freedman, Clarke Hutton and Kathleen Hale. 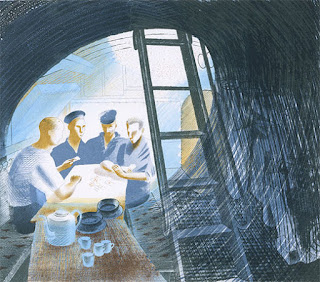 It's funny to think how when Ravilious' beautiful watercolours were exhibited at the National Gallery, he was criticised as a war artist as it was thought that he was more concerned with capturing the effects of the landscape and light, rather than the human drama of war. Ravilious was posted onto the submarine HMS Dolphin, which set sail from Gosport in the summer of 1940, and found in the confines of the submarine the perfect subject matter for his work. 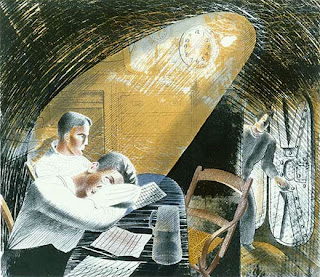 The resulting lithographs were printed by Cowell's of Ipswich, as the Curwen Press in the east end of London had been bombed, and sold by the Leicester Gallery. It is not known how many sets of the edition were printed because of the difficulties of doing so during the war. 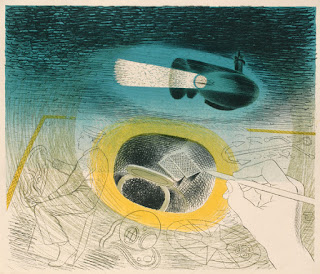 I think the images of Submarine Dream are beautifully designed and capture perfectly the claustrophobic conditions and boredom the submariners would have had to put up with on a daily basis. I also think that despite their age they still remain fresh and 'modern' looking. The book also contains reproductions of Ravilious' little seen original sketches for the series, many of which are in the National Maritime Museum archive. 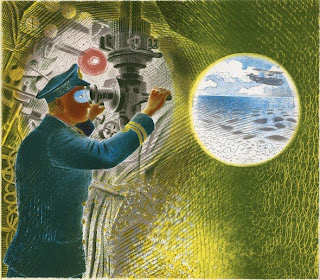 Ravilious Submarine is published by Mainstone Press
Posted by joseph scissorhands at 12:14