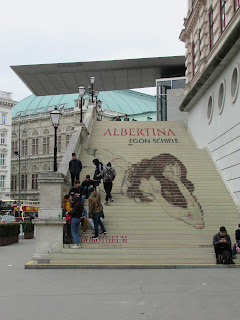 The first museum I came across on my initial city walk in Vienna was the Albertina. I hadn't planned on visiting, but after seeing the great advertising display on the stairs, I decided I had to pop in. I was well rewarded with perhaps the strongest show of the year for me thus far - an exhibition of Egon Schiele's drawings and graphic work. I had seen Egon Schiele: The Radical Nude at the Royal Academy in 2015 (here), but this show was much more comprehensive. 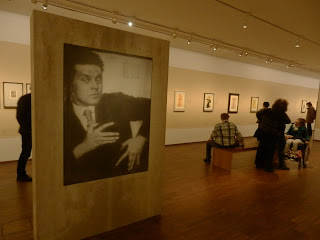 Egon Schiele is a large retrospective featuring 160 of the artists gouaches and drawings which currently occupies the whole of the first floor of the Albertina complex. The drawings are fantastically raw and expressionistic. The premise of the show was to illustrate just how out of sync Schiele's work was with fin de siècle Viennese society of the time. Schiele was one of the first artists to attempt to portray the intense psychological state of his sitters as well as their physical characteristics. Vienna during the same period coincidentally, was also home to Sigmund Freud, founder of the concept of psychoanalysis whose ideas were still being developed during this period. 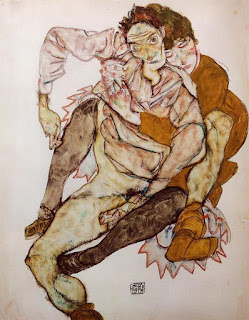 Many of the pictures in this show are portraits or figure studies in which the subjects are confrontational; staring defiantly out of the picture plane at the viewer. Many of the subjects seem alien-like because of the way in which Schiele has emaciated them, elongating the limbs and having them strike harsh angular poses. The drawings really challenge the accepted norms of beauty, and although some of the drawings are very sensual, they are at the same time extremely sensitively rendered. Others are quite explicit and capture very intimate moments, which would ultimately be instrumental in Schiele's downfall. Certain drawings and the company of young girls at his studio scandalised turn of the century Austria, and lead to Schiele spending a short time in prison for exhibiting erotic drawings in a place accessible to children. 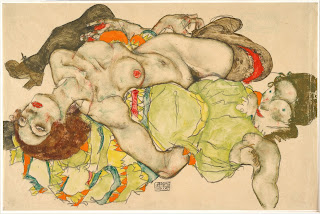 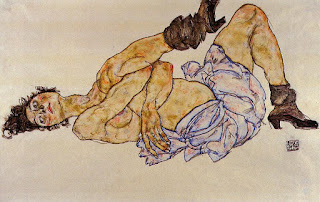 Egon Schiele (1890- 1918), was born in Tulln an de Donau near Vienna, and his natural draughtsmanship was noticed and encouraged at an early age. After some formal training in Vienna, Schiele sought out Gustav Klimt whose work he greatly admired, and a strong relationship developed in which Klimt became a mentor who introduced Schiele to life models, important patrons, and the work of other avant garde artists such as Munch and Van Gogh. Schiele then moved away from the more decorative Jugendstil stylings of Klimt, and began to develop his own visual language in which figures became more angular, and distorted, with a more sombre colour palette. Klimt and Schiele would to remain close friends though until Klimt's death in 1918. 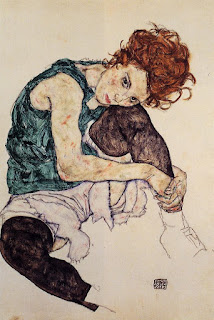 Schiele's drawing technique is quite wonderful. Superb draughtsmanship is augmented by loose, textural brushwork. This is then worked into whilst wet with a pointed tool - perhaps the end of his paintbrush - to give a negative as well as positive line. There are also little bursts of colour to draw the viewers eye to areas such as the mouths, nipples and genitals. 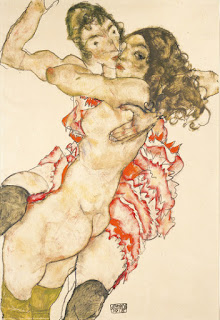 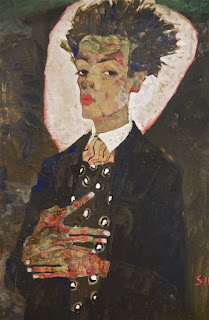 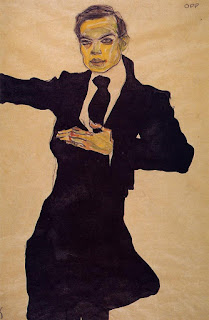 The distortion of the body in a couple of the drawings, and the the way in which the clothes are draped resemble some modern fashion illustrations. You can see why Schiele's work is so influential on the work of fashion and textile students. The drawings of the undergrads of the Fashion course at Ravensbourne College were very similar in style when I used to take my students there for life drawing sessions. 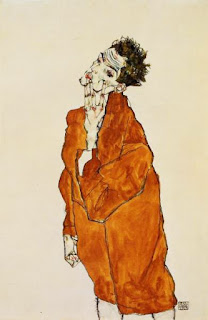 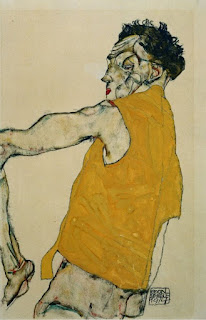 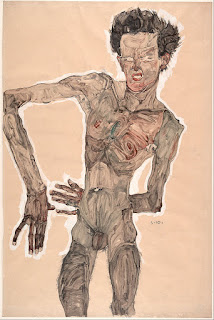 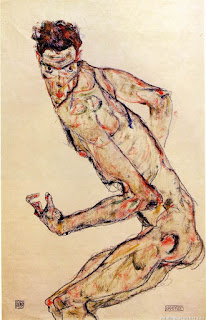 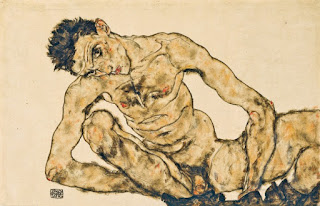 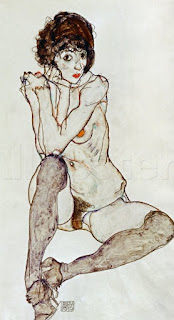 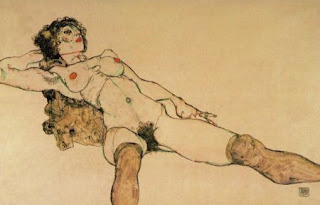 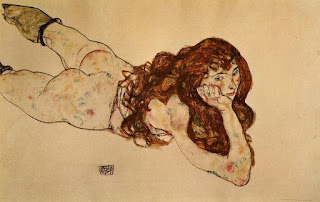 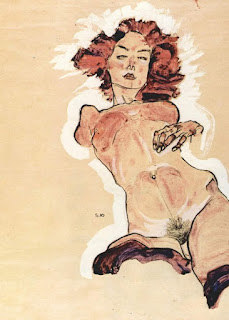 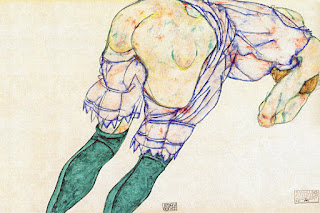 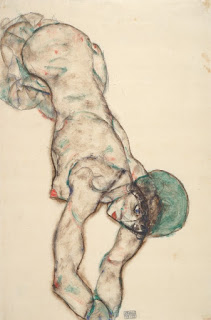 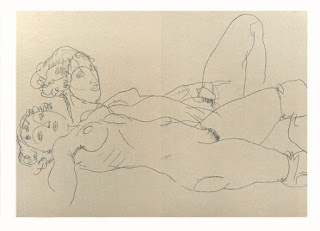 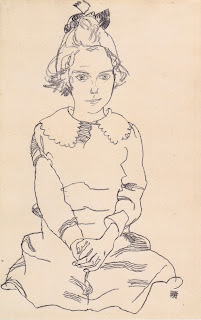 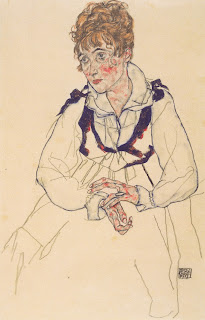 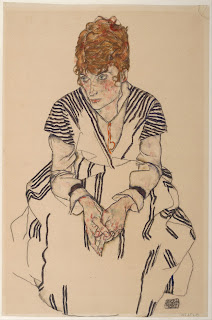 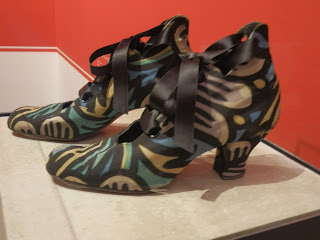 The textile print on these shoes is wonderfully decorative, and were worn by Schiele's wife Edith, (portrait above in stripey dress). 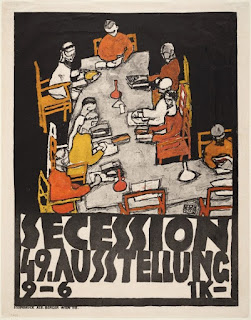 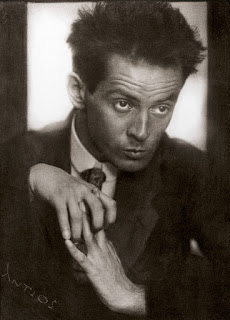 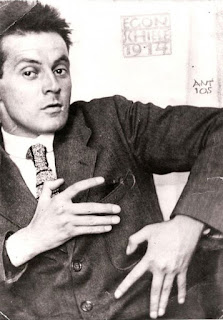 Schiele's graphic poster for the 49th Secession is included in the exhibition, as are a number of small photographs of him posing with his familiar stylised hand gestures. It was thought that he adopted these gestures from portraits of Christ that he had seen in books on Byzantine art. In these images the Christ figures appear with index and middle fingers spread apart forming a V. By adopting this pose it is speculated that Schiele is likening himself to Christ, but as a saviour of art. 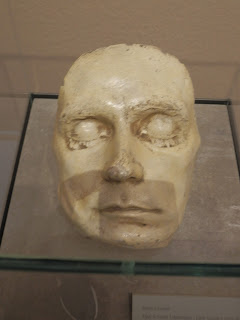 The exhibition ends on a sad note with this grim death mask of Schiele after having succumbed to the Spanish flu epidemic that ravaged europe in 1918. This really is a remarkable, comprehensive exhibition that charts Schiele's virtuoso draughtsmanship and development from childhood drawings to fully fledged taboo-breaking artist. The exhibition more than adequately demonstrates how at odds Schiele's work was with Viennese society of the period. Although most people interested in Schiele's art will be familiar with many of the drawings, it was a great opportunity to see them in the city and culture where many of them were created. It was also really good to see the drawings in the context of work by Schiele's contemporaries like Gustav Klimt and Koloman Moser. Fantastic as the drawings in this exhibition were though, I would go on to discover even more magnificent examples of Schiele's work in Vienna.


Posted by joseph scissorhands at 02:53