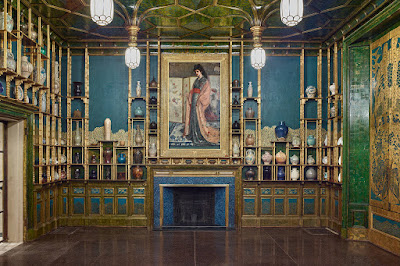 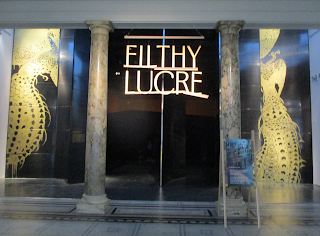 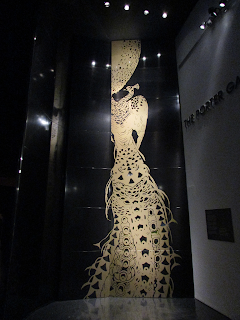 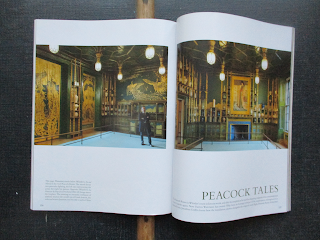 I am a huge admirer of the work of James McNeil Whistler (and have featured his adaptations of the butterfly motif as a personal monogram on these pages before here), his character and artistic ego not so much though, as the following tale will explain. I had first seen Darren Waterston's Filthy Lucre installation in World of Interiors magazine five years ago and was enchanted by both it, and the original James McNeil Whistler room it was based on. The backstory and notoriety of the originals history, tainted by fights over aesthetic vision and money, and how an artistic ego soured friendships, ended patronage, and dissolved into bitter recriminations and acrimony was fascinating too. Both rooms are usually based in America, (Whistler's original at the Freer Gallery in the Smithsonian in Washington). Now Waterston's installation has opened at the Victoria and Albert museum affording me a rare chance to investigate it first-hand. The original Peacock Room, (or Harmony in Blue and Gold: The Peacock Room, to give it its proper name), was created a short distance from the V&A museum at 49 Prince's Gate, Kensington in the home of shipping magnate Frederick Richards Leyland in 1876-77. The architect Richard Norman Shaw was given the task of remodelling and redecorating elements of the home, who in turn entrusted the design of the dining room to Thomas Jeckyll. Jeckyll envisaged the room as a porcelain room or Porsellanzimmer, with walls lined with intricate lattice-work shelves to display Leyland's collection of historic Chinese blue and white porcelain with a Tudor-style panelled ceiling with globed pendant gas lights. Before Jeckyll could complete the scheme however, he fell ill and the American artist James McNeill Whistler who was a friend of Leyland and whose painting - Rose and Silver: The Princess from the Land of Porcelain, was the centre-piece of the room, volunteered to complete the room. Whistler was concerned that the red roses on leather panels in Jeckyll's scheme clashed with the colours in his painting, and suggested retouching these with yellow paint. Leyland agreed to this minor alteration and the embellishing of the wainscotting with a "wave pattern" derived from a Jeckyll design on stained glass doors. Leyland then departed to Speke Hall his Liverpool residence, and emboldened in his patrons absence Whistler grew more ambitious in his revisions. He repainted the wallpaper and pendant ceiling, gilded all of the wooden surfces in gold leaf, added gold murals and three large gold peacocks over the window shutters.

Well, you know, I just painted on. I went on ―without design or sketch― it grew as I painted. And toward the end I reached such a point of perfection ―putting in every touch with such freedom― that when I came round to the corner where I started, why, I had to paint part of it over again, as the difference would have been too marked. And the harmony in blue and gold developing, you know, I forgot everything in my joy in it.


Work completed, Whistler presented Leyland with the invoice for £2000. On recieving the bill for additional work which was not sanctioned, Leyland and Whistler quarrelled so violently that the artist was forcibly ejected from the house and the two never spoke again. During the argument Whistler is reported to have crowed "Ah, I have made you famous. My work will live when you are forgotten. Still, per chance, in the dim ages to come you will be remembered as the proprietor of the Peacock Room." Whistler's words must have struck Leyland at some level as he kept the room just as it was despite the enmity between the two. At some point Whistler gained further entry to the room and painted a mural of two fighting male peacocks, representing artist and patron, and entitled it Art and Money or The Story of the Room. On Leyland's demise the Peacock Room was purchased by American industrialist Charles Lang Freer, who had it shipped to his home in Detroit, and then bequeathed it to the nation and it's current home in the Smithsonian in Washington. 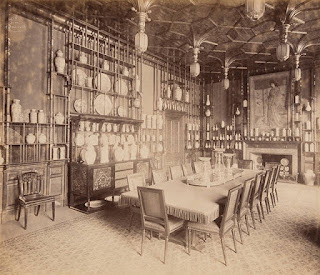 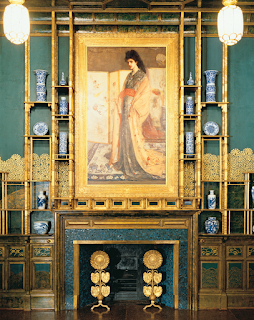 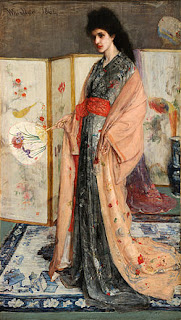 James McNeill Whistler - Rose and Silver: The Princess from the Land of Porcelain (1863-1865) 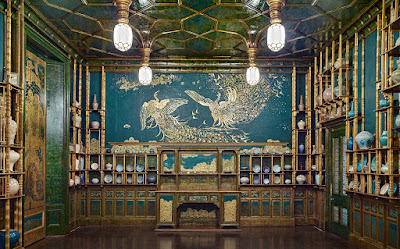 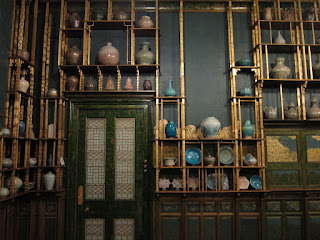 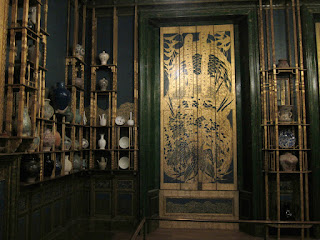 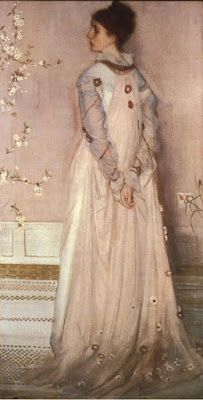 Above are Whistler's portraits of Frances and Frederick Leyland painted in the earlier, happier times of their artist/patron friendship. Whistler was especially fond of Frances, and the strain of the fallout between her husband and Whistler may have been instrumental in the breakdown of the Leyland's marriage. Another victim of the feud was the sensitive architect Jeckyll who was so shocked by the sight of the room and Whistler's revisions to his work that he went home and having suffered a nervous breakdown was apparently reported to have been subsequently found on the floor of his studio covered in gold leaf. Whistler is said to have smiled when he heard this news. So traumatic was this event on Jeckyll that he never recovered, was committed to an aylum, and died insane three years later. 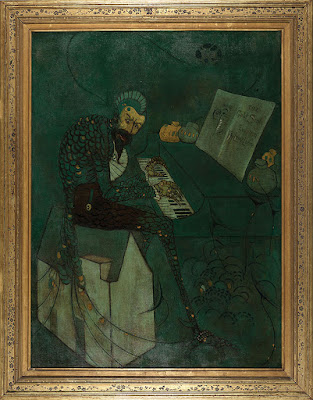 Following the tempestuous fallout Whistler described Leyland as “a befrilled Philistine” because of Leyland's penchant for wearing frilly shirts, and “a criminal of commerce” then in a departure from the formal portrait made years earlier, depicted his patron and former friend as a mad, human/peacock hybrid sitting on Whistler's house (Leyland had financed the design and construction of Whistler's White House in Chelsea), at a piano with bags of money. The whole sorry tale is a lesson in artistic ego and the sometimes problematic terrain between artist and the patron's money in the art world which still survives to this day as certain recent high profile cases in the news featuring artists Jeff Koons and Derek Fourdjour attest. 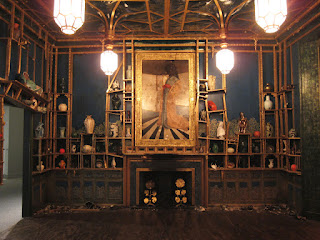 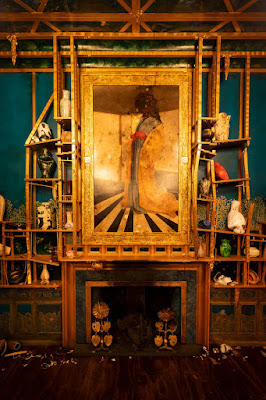 The idea for Waterston's Filthy Lucre grew out of an invitation to exhibit at Massachusetts Museum of Contemporary Art. He was initially going to complete a mural, but during his research he became fascinated with Whistler's Peacock Room. Ironically like Whistler, his plans grew and exceeded the original remit and budget. The museum backed him however, and began a fundraising campaign and enlisted specialist craftspeople to assist in the project. Waterston re-envisaged the Peacock Room in ruinous decay, reflecting the circumstances of the soured artist-patron relationship from which the original was manifested. In Waterston's room there is a dramatic sense of decay in which the lattice-work shelves are splintered, the ceramics warped and smashed, gold stalactites drip and puddle beneath a mural of peacocks attacking and disembowelling each other, and a malevolent red light emanates from the behind the peacock emblazoned window shutters. The lady in the painting The Princess from the Land of Porcelain is blacked out, reflecting the sense of ruin that has befallen the room. There is also a mournful soundtrack of sad music and muffled voices playing which adds to the sense of despair in the installation. Filthy Lucre is a really poignant and wonderfully crafted reaction to a beautiful original room, and the unpleasant aftermath of its creation. 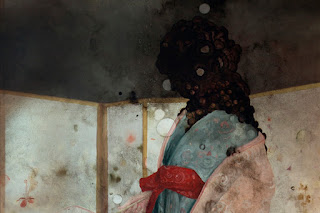 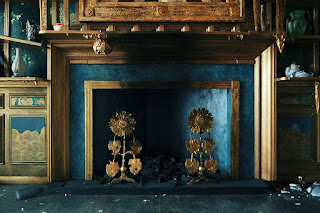 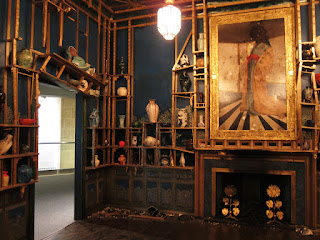 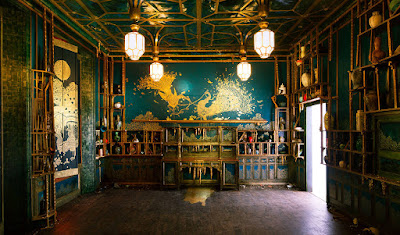 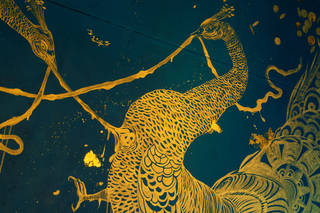 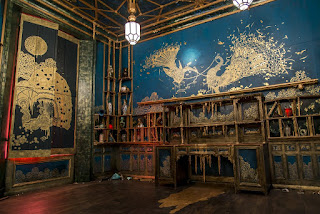 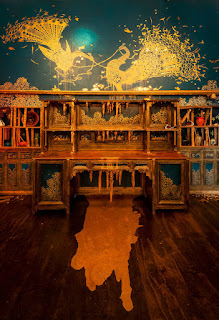 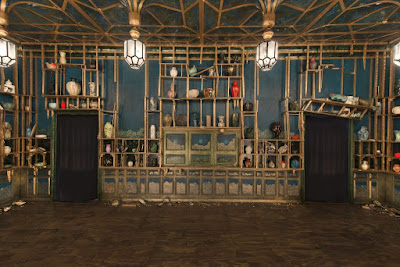 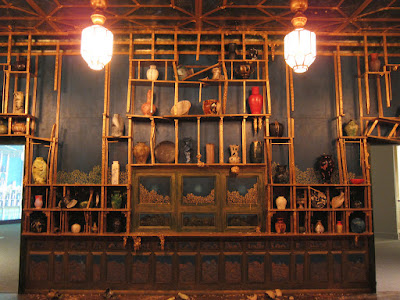 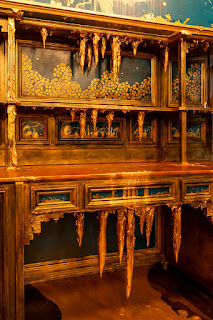 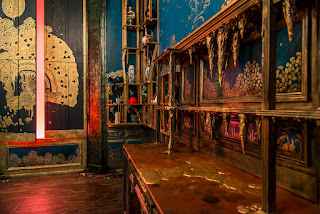 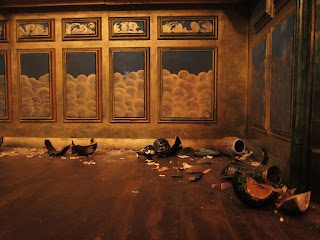 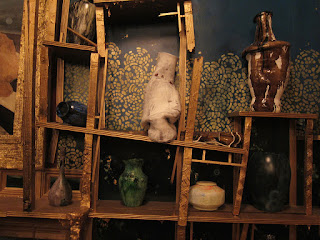 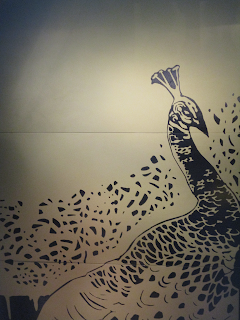 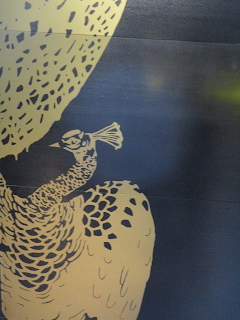 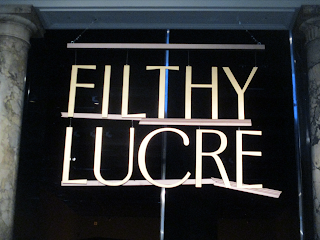 Posted by joseph scissorhands at 02:26