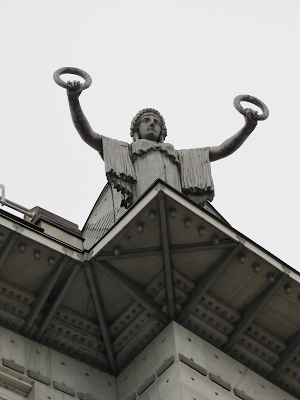 Another must-see on my itinerary during my latest trip to Vienna was another imposing  building by the Secessionist architect Otto Wagner. The building is the Austrian Post Savings Bank (Österreichische Postsparkasse), which I began to look for on my last visit to the city, but missed as I got distracted in my search for the Hundertwasserhaus (here). The Austrian Post Savings Bank is a huge building built between 1904 and 1906 - the very same period when he also began work on Kirche am Steinhof - and then extended from 1910-1912. Although the purpose and use of both buildings is very different, there remain certain stylistic similarities. This building is functional, with geometric features and clean lines, and must have seemed startlingly modern at the time for the Viennese more accustomed to the pretty, neo-classical buildings surrounding it. Visually and psychologically, the bank gives a solid, imposing, impression like a citadel or fortress. As such it has an air of security about it, just the sort of place working customers would feel safe depositing their hard earned money. The facade of the Austrian Post Savings Bank is covered with a combination of granite and marble slabs, and was one of the first to use aluminium both on the exterior in the rivets studding the surface, and statues topping the building, and in interior fixtures and fittings such as the heating fans, doorknobs and grilles. The building was also one of the first to employ the use of the then new material of reinforced concrete in its construction. Perhaps the most obvious thing I noticed about the Post Office Savings Bank in comparison to Wagner's other buildings in the Austrian capital, was the absence of colour. There is none of the signature green used on the metalwork of his stations for the city's Stadtbahn (here), or the lavish gilding on Kirche am Steinhof (here). The Savings Bank is all very monochromatic and grey, enlivened only by white and black decoration, and the dulled surfaces of frosted glass, or shiny reflections of grey aluminium. 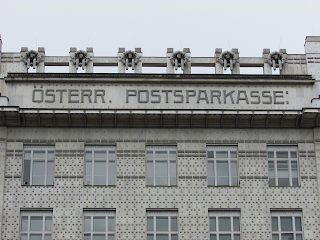 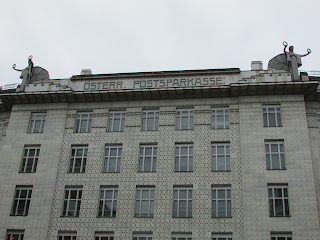 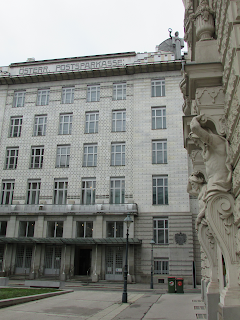 The classically-styled but strikingly modern aluminium angels on the attica above the building are the work of Wagner's collaborator, sculptor Othmar Schimkowitz, who also designed the decorative angels on Wagner's Kirche am Steinhof. 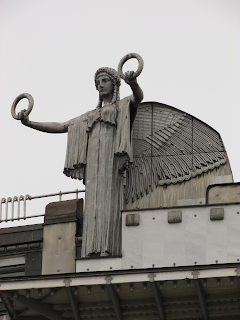 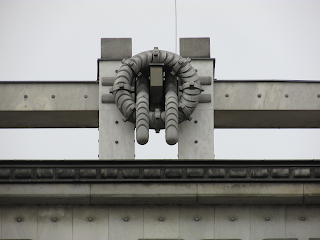 These circular wreath-like motifs are signature Wagner ornamentation, as are the rivet-studded surface of the building, and the grid-like formations of the front doors at the main entrance. 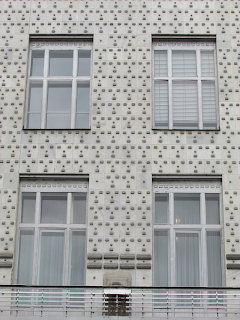 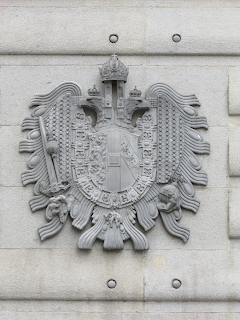 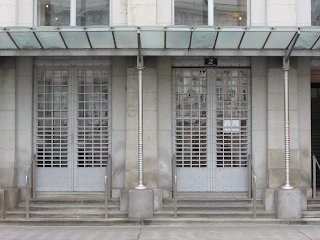 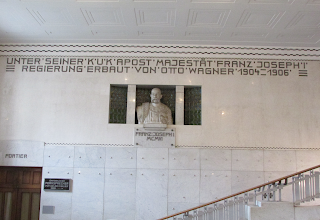 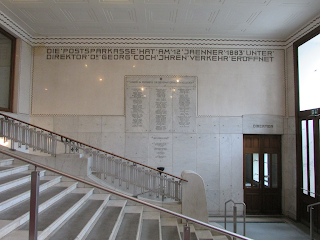 The foyer is faced with marble and decorative plaster, and leads into the cavernous, atrium-style Grand Hall of the Savings Bank. The Grand Hall space was the central banking room containing numerous desks where the cashiers were located, and where the customers financial transactions would have taken place. It is covered with a large frosted glass skylight allowing plenty of natural light to flood into the space. The floor is also filled with interesting diamond-shaped, faceted glass tiles. Again, I was struck by how modern the space appeared. The tall slender aluminium heaters looked like something dreamt up in a futuristic vision from science fiction, rather than designs created in 1904. 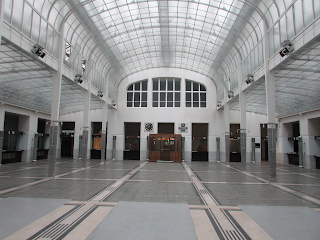 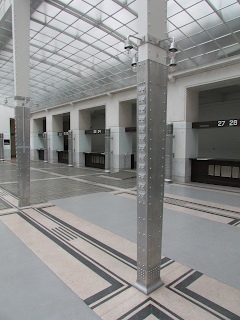 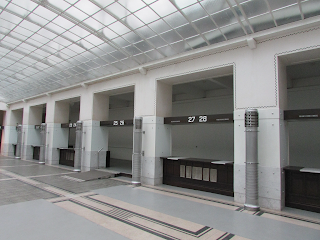 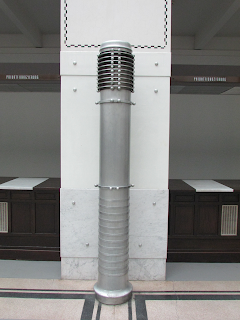 One of the aluminium heaters designed in 1904. 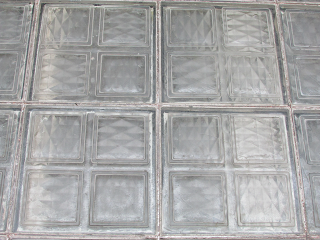 Faceted glass tiles set into the floor allowing light to penetrate to rooms below. The Post Office boxes and mail sorting rooms are located in the space beneath these tiles in the Grand Hall. 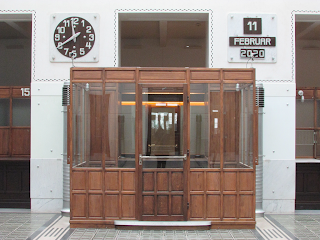 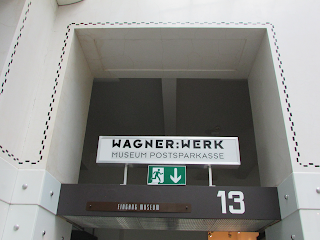 After enjoying the Grand Hall I made my way through to the museum space at the back, which contained the architectural drawings, models and photographs of the Savings Bank in its heyday. The space here was more representative to my eyes of Viennese art nouveau than that of the Grand Hall, as there were more decorative elements. The use of simple, painted geometric black ornamentation really lifted the space, and was pleasing to the eye. I think it may have been inspired by Egyptian art which played a big part in nouveau and deco design. Also very pleasing, and again surprisingly contemporary, were the serving counters which here were all shiny glass and sleek aluminium. They reminded me of the interiors of midcentury American banks, and the reflected surfaces seen in the works of the American photorealist painters of the 1960s such as Richard Estes and Ralph Goings. 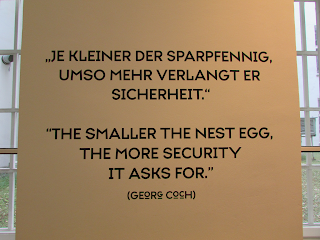 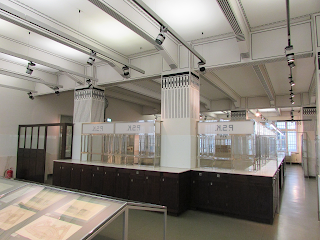 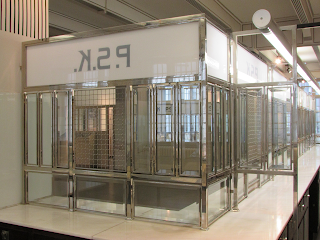 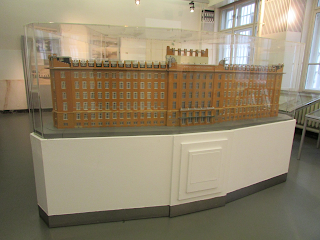 An architectural model of the Savings Bank. 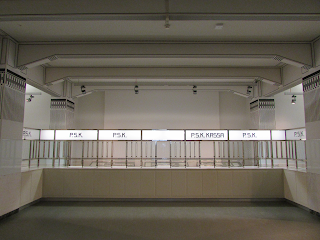 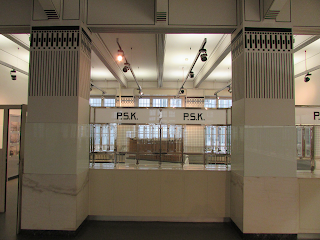 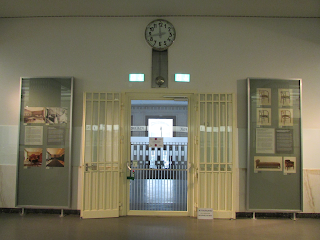 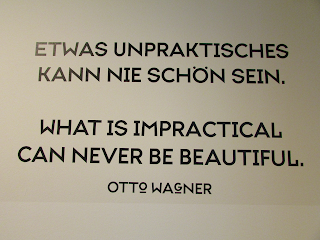 
Posted by joseph scissorhands at 09:00