There is a rather wonderful exhibition currently in the Print room of the British Museum. It shows off the complete set of 100 etchings created by Picasso in his classical period, between 1930 and 1937, and commissioned by the art dealer Ambroise Vollard. This set of etchings is known as the Vollard Suite. 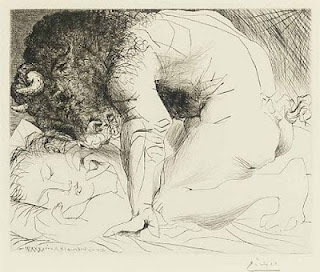 The prints reflect Picasso's obsession with his young mistress Marie-Therese Walter, his interest in classicism, and brief flirtation with Surrealism. The Suite is divided into themes which include, The Battle of Love, The Sculptors Studio, Rembrandt, The Minotaur and The Blind Minotaur, and the last being three portraits of Ambroise Vollard. The display is complemented by the inclusion of etchings by Rembrandt, (the best ever etcher?), Goya, and also classical busts and ceramics. 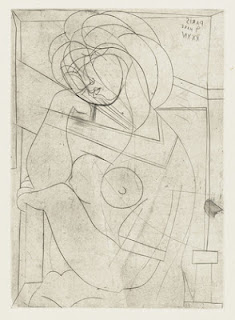 Among the prints my favourite image is Blind Minotaur Led through the Night by Girl with a Fluttering Dove 1935. This beautiful, atmospheric image in which a young girl with a dove leads the blinded minotaur through the night, hold its own against many of his actual paintings. It is an image full of tenderness and pathos and I wonder how it would have looked had Picasso developed it into a large painting. There is a beautiful contrast of light which emanates from the bodies of the characters, and the rich black of the night scene. 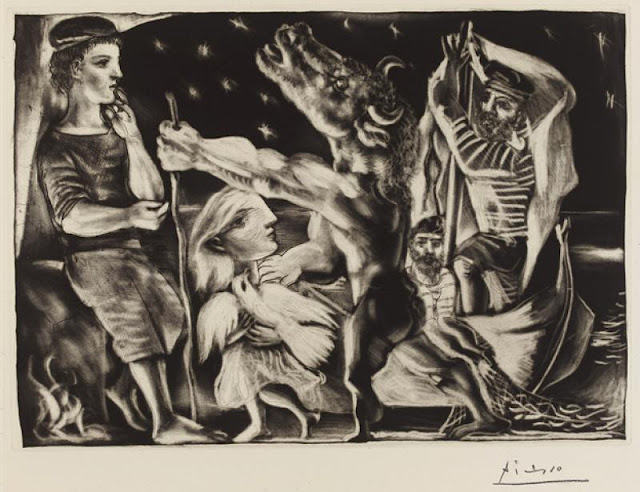 Whilst some of the plates would have benefited from more work by Picasso, the exhibition displays his inventiveness and mastery of line and composition. It is one I shall definately be returning to again before it closes in September.

Posted by joseph scissorhands at 11:29