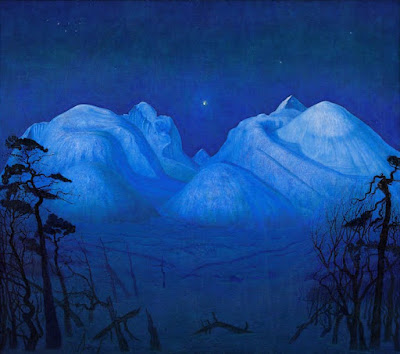 
Harald Sohlberg (1869-1935), one of Norway's greatest painters, created works that evoke the wild nature of the Nordic landscape, from the softness of its flower fields to the harsh beauty of its winters. This first major UK exhibition of Sohlberg's works celebrates 150 years since the artist's birth, with a unique opportunity to see these magnificent paintings in the UK. With close to 100 works, we showcase the breadth and ambiguity of his work, and its enduring relevance in today's world. Like Edvard Munch, Sohlberg strongly denied the influence of other contemporary artists, disassociating himself from discussions about where he belonged in the history of art. Instead, he relegated the origins of his artistic awakening to his own psyche and to the intense stories and mythologies of the Norwegian land. Consequently, Sohlberg’s paintings depict a world which is at once fantastical, yet familiar. 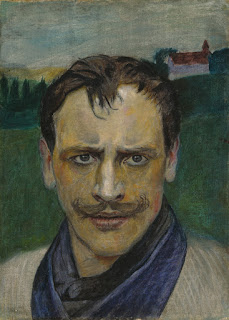 I had never heard of Norwegian artist Harald Sohlberg before visiting this retrospective to celebrate the 150th anniversary of his birth at Dulwich Picture Gallery. Making the effort to go see it though, I was well rewarded as this collection of work was one of the most affecting that I have seen this year. So affecting in fact that I went back for another visit the very next day! Sohlberg studied in Copenhagen and was exposed to a large exhibition of Paul Gauguin's paintings, but despite this claimed his inspiration came from within, as well as the landscapes and folklore of his native Norway.  Like our very own Eric Ravilious, Sohlberg's landscapes are largely devoid of the human presence, which is only hinted at by lights in windows, or certain man-made objects. This human absence in Sohlberg's work along with the often dusk/twilight periods in which his paintings are set creates a certain mystical mood, and an atmosphere of peace and stillness in these pictures. This stillness and 'silence' is also present in the paintings of another Scandinavian artist - Vilhelm Hammershøi seen earlier this year here, and here. Sohlberg builds up layers of translucent colours to create intense luminous light effects emphasising these scenes of dusk, or the northern lights on his landscapes. Another trick he employs is to use little patches of warm colour such as red amongst the dominant blues to lead the eye into the distance or foreground of a painting. Taking a cue from Whistler whose Nocturnes and tonal works were known to Norwegian artists of the period, Sohlberg adopted a close tonal palette to emphasise the sense of mood in his paintings and gave his works titles from musical terms. The Andante paintings and Midsummer Night: Nordic Theme certainly appear to shimmer despite being monochromatically blue. The blue close blue tonal harmonies in these works actually seem warm and not at all cold when used by Sohlberg, but invoke instead a mood of calm, and contemplation in the way that Picasso did in his Blue Period paintings, but without the often overwrought melancholy. 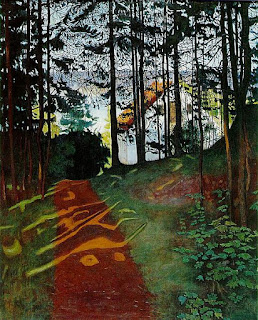 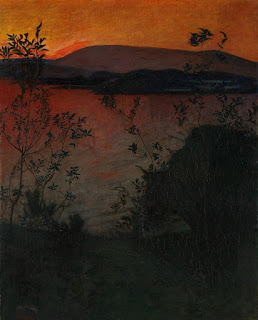 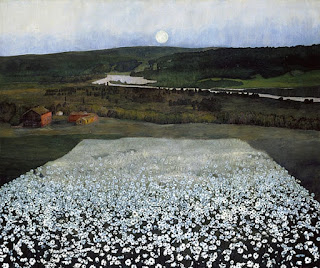 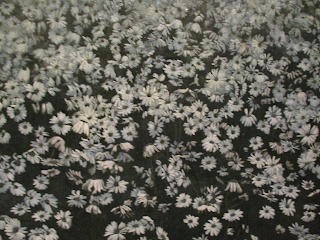 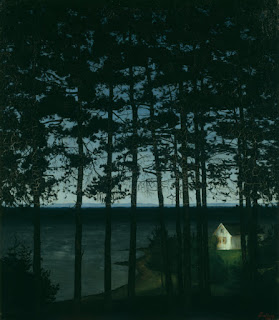 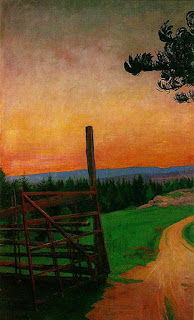 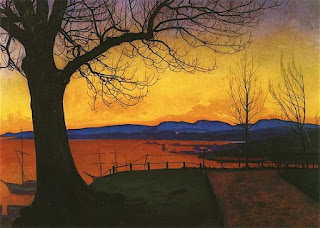 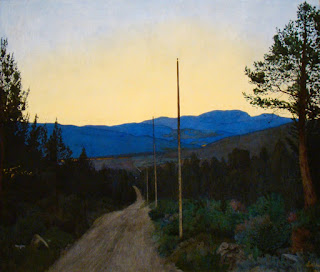 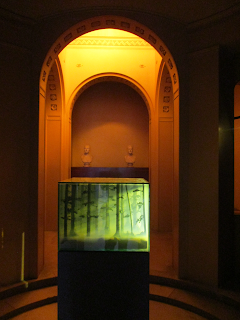 Mariele Neudecker - And Then The World Changed Colour: Breathing Yellow

"All landscapes are charged with personal and universal histories, with politics and ideas that cut deepinto our conscious and subconscious"  - Mariele Neudecker. 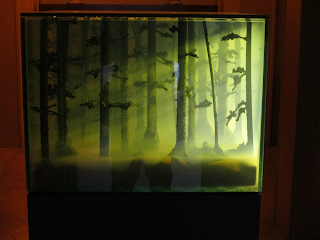 This wonderfully dramatic three-dimensional diorama in a glass tank was situated in the Mausoleum space in the middle of the Sohlberg exhibition, and was artist Neudecker's equally atmospheric response to the emotive poetry of Sohlberg's painted landscapes. Neudecker was invited to create one of her tank-works - "three-dimensional sections of landscapes where the real and imaginary collide submerged in water solutions". This piece represents a forest devoid of a human presence, and was therefore suitably comparable to Sohlberg's empty landscapes. 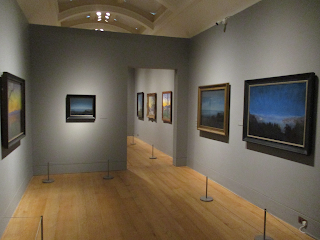 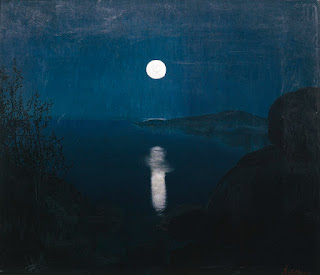 Harald Sohlberg - Moonlight By the Sea 1907 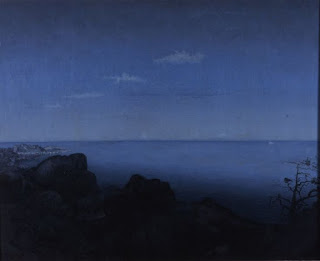 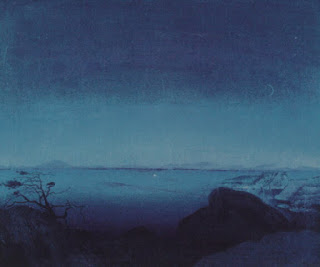 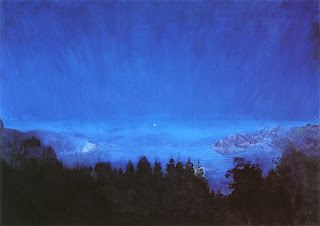 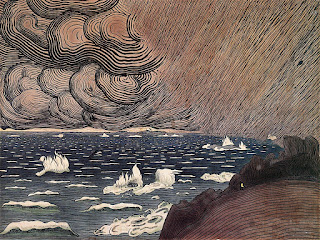 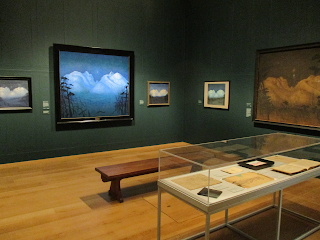 Sohlberg's was a sensitive soul, and his work got ever better as he evolved as an artist. My favourite room of his work in the exhibition by far was the last. It best displayed the duality of the poetic and the spiritual self in his art, as well as the depths of his connection to Nature and its expression in his work. This final gallery space contained two of Sohlberg's most dramatic subjects, and stand as a testament his artistic achievements in the magnificent Winter Night in the Mountains series. On my second visit to the exhibition I rushed straight through the other rooms in order to selfishly have this last room all to myself before the other visitors got to it. Sitting in the silence of these paintings was like being in church. A truly contemplative, divine, experience. It is interesting to note that such is the power of the 1903 version of Winter Night in the Mountains (last picture below), that it has been voted Norway's national painting, it's subtlety perhaps outshining the expressionist angst of the works of Edvard Munch. The two following paintings entitled Night, in the last room were small, but also powerful. 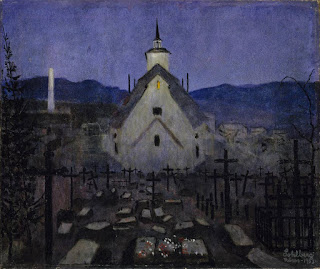 "An evening in the Spring I came up and saw this motif in the graveyard - a deathliness over it. The crosses had fallen over each other. On one of them I remember the inscription  'you will not be forgotten' but there were only pieces left of the cross. Yes that was humanity. I will not forget how forgotten and desolate this graveyard seemed to me and there was the church like a division between the homes of the living and the homes of the dead. To give a kind of contradiction to how everything was forgotten and derelict I placed a new grave with roses in the foreground." 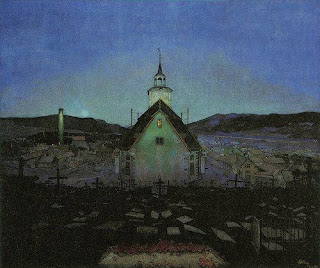 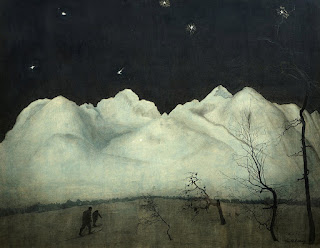 It was fascinating to see the back-story, and development to his magnum opus - Winter Night in the Mountains series. Presented together with the two Night paintings it provided a sublime experience.

"When I first met with this motif...I was almost overcome by a rush of emotion greater than I had ever experienced before. The longer I stood gazing at the scene the more I seemed to feel what a solitary and pitiful atom I was in an endless universe. I grew uneasy. I could hear my heart beginning to beat loudly. It was as if I had suddenly awakened in a new, unimagined and inexplicable world.
The deep, long moor where I stood was bathed in a half light and mysterious shadow. I saw deformed, gnarled, and overturned trees, mute expressions of unconceivably strong forces of Nature, of the might and rage of storms.
Now all lay calm and still, the quietness of death. I could hear my own quick breathing.
Before me in the far distance rose a range of mountains, beautiful and majestic in the moonlight, like petrified giants. The scene was the grandest and most full of fantastic quiet that I have ever witnessed."  - Harald Sohlberg 1915. 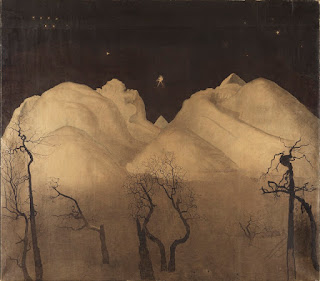 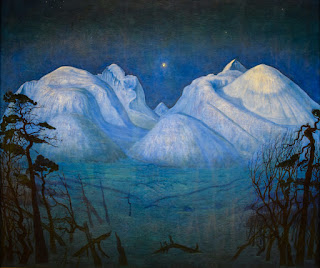 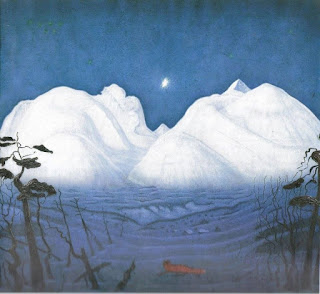 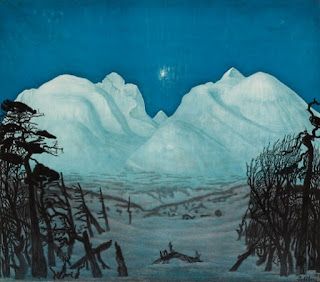 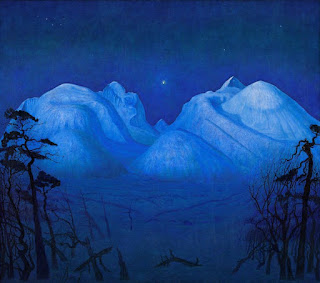 Perhaps the best version of Winter Night in the Mountains, painted by Sohlberg was this 1903 version saturated with deep, intense, luminous blues. Given his written testament above on encountering this scene, the presence of the star glowing between the mountain peaks, and certainly the crucifix etched into the peak of the right-hand mountain hint at a religious, or at least spiritual awakening in his development. Sohlberg denies this though, and claims the cross/crucifix was purely coincidental. This is hard to believe though given the intensity of his metaphysical beliefs. This was a wonderful exhibition, and that last room was an almost transcendent space. 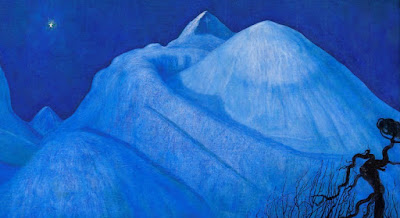 In a letter to the National Gallery of Norway in 1914, Sohlberg stated that he thought this most significant work because 'more than in any other, I have succeeded in giving expression to that which is the central, the most characteristic feature of my art, ie, the decorative, monumental and unified, in combination with the precise and detailed in colour, form, and line, as I strongly and personally see and feel it.'

Posted by joseph scissorhands at 01:57